The Conseil Européen des Jeunes Agriculteurs (CEJA) ("European Council of Young Farmers") is an NPO umbrella organisation uniting young farmers and, with its office located in Brussels, it is one of the key advocates for the agricultural sector in Europe. At present, CEJA has 33 member organisations, including one observer member, from EU member states, representing around two million young farmers. CEJA’s main objectives are to ease the establishment of young farmers in Europe, to inform, train and represent them, to act as a platform for communication among young farmers, and to make European citizens aware of farming-related issues. CEJA maintains contact with European institutions and decision-makers, as well as organisations dealing with agriculture, and takes part in 18 Agricultural Advisory Groups of the European Commission. One of CEJA’s most important tasks is to explain the Common Agricultural Policy (CAP), its reforms and adjustments, and to show how the two pillars of the CAP assist young farmers in rural areas to manage the structural changes in Europe’s agricultural sector. CEJA has co-organised numerous seminars, visits and conferences and produced multiple reports. Among other activities, they have been involved in the Exchange Programme for Young Farmers (PEJA) that allows young people to experience the agricultural sector in another country; the Tellus educational project, which reached millions of European school children; and the school fruit scheme aimed at encouraging healthy eating habits in young people. 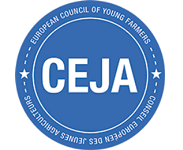